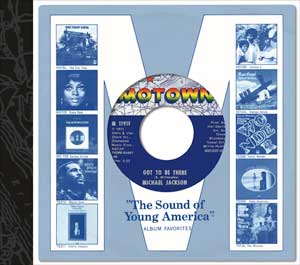 SONGS FEATURED IN THE BOX:

The whole story is laid out in rich detail across five discs that feature not only the hits and their B-sides, but also rare mixes, pulled releases and more. And as is expected in this series, Vol. 11B is given a beautiful frame: “album” style packaging with a 124-page booklet featuring detailed recording and release dates, and similarly detailed track-by-track histories written by co-producers Keith Hughes and Harry Weinger, and Grammy®-nominated Bill Dahl. Dr. Andrew Flory, author and Assistant Professor of Music History at Shenandoah Conservatory, continues his insightful overview of the era first laid out in Vol. 11A. Introducing this package is an engaging personal essay by Scott Regan, Detroit’s most popular DJ from the sixties who by 1971 was a Motown staff writer and producer.

Another great era, another great set: The Complete Motown Singles Vol. 11B: 1971 completes the story of 1971, in an acclaimed series that has received Reissue of the Year honors from Mojo magazine, SoulMusic.com and others, and that PitchforkMedia.com calls “a godsend... about as good a job as humanly possible.”

Included is an actual 45 RPM vinyl single — Michael Jackson “Got To Be There”.